Blockchain-based technologies, as expressed by cryptocurrencies and other forms of digital assets like non-fungible tokens (NFTs), are beginning to make their mark across many different industries. Although appearing little different at first glance from other types of digital currency, the excitement around crypto and NFTs revolves around their enabling features in digital transactions, especially with property management.

NFTs, in their own right, have garnered a lot of interest over the past couple of years due to the way they have enabled the secure and authenticated transfer of physical items via blockchain. Stripped down, NFTs are simply tokens that represent unique assets.

In the case of art and collectibles, this has proven to be a very useful feature that has allowed people to create NFTs representing unique and rare works of art and culture. If you owned an NFT, you owned the creative rights to an artwork – verifiable by anyone simply by cross-referencing the NFT data to a public ledger

Yet NFTs in this form have barely scratched the surface of what is possible, especially when it comes to industries where non-fungibility and fungibility factors are crucial aspects.

Beyond the static use of NFT in games

Game Developers DRepublic, The Team Behind The Next MMORPG Cradles: origin of speciesare among those who believe blockchain technology can provide solutions that could spawn game-changing innovations in the gaming industry.

While some gaming companies have already dabbled in crypto and NFTs, they have so far had limited success. The high profile NFT efforts have even resulted in a major backlash from the gaming community. The anger drawn by NFT experiences like Ubisoft’s can be attributed to the simplistic implementation of NFTs in games, either as an alternative currency or as a way to generate more money for the company by generating even more “unique” items like skins. In other words, NFTs in games have so far only served to reinforce the much maligned “lootbox” mentality seen by many gamers as a pain in the neck for game developers.

Cradle developers are looking to move beyond the static features of NFTs that have made them so popular among speculators, by refining a new type of NFT token based on what they call the EIP-3664 protocol (technically it’s just naming a proposal for a new set of rules on the blockchain), which expands on the existing NFT standards, ERC721 and ERC1155.

The new EIP3664 NFTs will allow all game elements to hold much more information than regular NFTs, giving them many more attributes which translates to a variety of ways the game can interact with those elements. In game terms, this simply means that the entire game world is made up of components that can be combined or separated from each other.

NFT components can be described like this. If characters, objects, and even plants and animals are all made of NFT components, it would be possible for a player to create and fully participate in the world-building of a virtual universe. For example, you would harvest raw materials from nature and combine them to create tools and weapons bearing all the different attributes of their individual components. Then attach those tools, weapons, clothes, and even skills to a character and that new character carries all the different attributes of all of their components combined. Likewise, you can break an item down into all of its separate components to recreate a virtually limitless combination of possible new items and characters.

Indeed, the EIP-3664 protocol is designed to make these digital assets more customizable so that Cradles players can move and modify their in-game items unlimitedly by harvesting raw materials obtained by exploring and going on adventures. .

Importantly, NFTs in Cradles will also have evolutionary attributes hard-coded into each component, allowing all game elements to simulate the laws of time and physics – something no virtual world has been able to. implement correctly.

Players will be able to see their NFTs (as characters and even items) evolve over time. Rather than the static standards of today, Cradles will create a moving world with its own changes, deteriorations and progress.

A game that insists on new experiences 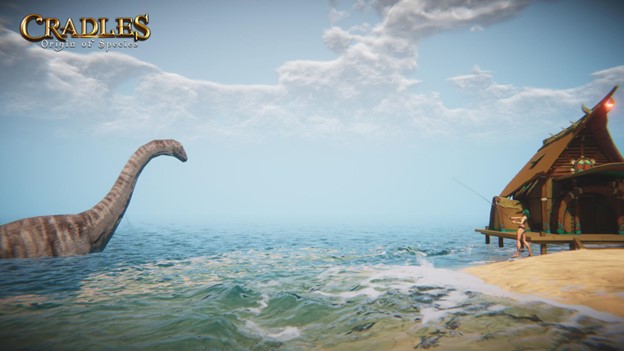 At the heart of Cradles is an open-world MMORPG with elements of the metaverse but with the aim of extending the conventional RPG experience.

Cradles players will experience a deep immersion hardware-enabled virtual reality game that allows them to play and interact with other players of any species they choose. The game will provide players with ultimate freedom, exploration ability and community building.

The entire virtual world also ties into the plot’s spine, where the characters are sent far back in time to a doomed future, seeking an answer to avoid a fate of extinction. In this way, exploration, research and discovery are the only ways to advance world building, as Cradles hopes to be a game that encourages and motivates new gameplay experiences, to try to go beyond the repetitive grinding spiral that most online RPGs tend to end. with.

Blockchain will have a say in the future of gaming

Although it has already raised significant funds for its development, the team behind the project is keen to lay the foundations for an open and decentralized community that will eventually lead to a standalone game.

Its growing community is not only seen as gamers but as game creators. Even now, game developers continue to work on improving the overall gaming experience by implementing new features, fixing bugs and testing new features – following instructions and feedback from its community on line.

Crib players can position themselves today and benefit from a sector that will continue to develop over time by attracting new users to its ecosystem. Today, according to data from Dapps Radar, the top 10 Blockchain games command over $700 million in assets with nearly one million active players.

Clearly, there is interest and potential for more decentralized forms of games that rely on community efforts to grow, especially when the relationship between gamers and traditional game developers in recent years has been seeded with pitfalls and frustration.

Tomorrow’s games may not necessarily be about earning cryptocurrency and buying in-game NFTs. traditional games, it could very well be the gateway to the future of gaming.